Stay on the Track (2) Story and Gameplay

Hello,
in my second post about my project Stay on the Track I want to tell you the Story and the Gameplay idea behind the map.
After I decided to use the Western setting for the map, the question was, why is the map placed there and what is the story behind that?
My luck is, that it´s not really one of my problems to find ideas, so I found really fast a few possible ideas for the story of the map and a gameplay use for that.
First I couldn´t decide what would maybe a better solution, a fight for precious metals or oil or maybe a war with Indians? But the base theme for the application was "track".
Okay Oil? Yeah the railroad is the main supply line to get the oil from the oil field to the refinery's. So maybe a competing company is trying to sabotage your railroad and you have to protect them? Remembers me a bit on "There will be blood".
Yeah what would be a nice story but oil was discovered real late in the wild west times and I wanted to create a real cool Western style map with steam trains and cowboys. And so I thought a bit more about the story. So if you think about the Wild West, what are you imagine?
Cowboys, horses, freedom, bandits, Indians. Right?
So that I finally come to this story:


The map puts the player in a fictional town called "Last Sun" in the Midwestern United States around 1880.
This is close to the "frontier", the border of Indian Territory. It has only a few hundred inhabitants,
which either try their luck as a rancher, or employees of the railroad company
which route leads through the village.
The city lies on erstwhile Indian Territory,
from were the natives were expelled by the settlers behind the "frontier".
The proximity to the Indian Territory and the associated hunting areas
have settled some hunters, fur traders, Interpreters and trackers,
and a few shady characters in and around the city.
The railroad is used by the inhabitants to transport the goods, so that the railroad soon become the stream of life for the city, and also brings more money and people in the city.
In order to increase their wealth, the settlers ordered to continue the construction of the route
over the border into Indian territory,
whereupon the Indians respond with attacks on the trains.
This breaks out a bitter battle over the railway line.

To formulate this text was much harder than the idea itself :D
And whats with the gameplay? Yeah the basic gameplay idea you should have already identified in the story about the map. Your goal as the player is it to defend the trains at all costs to prevent the goods of the ranchers and settlers. Source is mainly a Engine for shooter and small maps, with wide open areas source got its troubles, so how I could realize this gamemode. To defend trains you need open wide areas. To realise this and to finish my project soon enough for the application I decided to create just the city Last Sun from which trains start over the frontier. This was feasible and would also give me some more opportunities for the gameplay at all.


The basic idea of the level is to place the player in a part of an open world rpg in which the level the centre for the missions is. But the main goal for the player is to protect a train until the reaches his goal, Stay on the Track.
For this are a few special places in the city there the player can get special things and so on.
The train station for example is the starting point for a lot of missions. Further the church is because of its height a good landmark from which the player can find from every place of the level back to the city.
In the manor house in the back part of the city there the probably richest rancher of the region lives who has triggered the conflict between the settlers and Indians in Last Sun.
In the sheriffs office the player has the opportunity to take up missions in the name of law and order, or leave the prisoners in the jail.
In the bank the player can save his hard earned money. And in the shop he has the opportunity to get all the new stuff he need to survive in the outback from supplies to weapons up to ammunition.
The Saloon is like the train station the starting point for many missions. There is also the right place to talk to other settles to get the newest information's, to consume the drinks inventories of the owner or to instigate a real bar fight.


Why I made myself all the work to write down such a background story? That is easy, if you want to win someone for your project (and that was more or less my goal with this application) you have to show him in an easy and understandable way what you try to achieve with your work, and why it is also interesting for him. If you have a background story it is much easier to explain your map to others. And also it is much easier for yourself if you write something down on what you can be focused later.

I hope its readable, because I think in German this was a bit better to read :D

So that's enough text for now, in the next part I will show you the different stages of the development, that means less text, and more pictures :)
on Sunday, May 19, 2013 No comments:

Hello,
sorry that so much time has passed since my last post here, but I was busy with other things in the last months. But that didn't mean that I have made nothing in this time. My Game Design study has started and I have already made a few cool things in this time.
I hope that no one will blame me for that. And I will try to continue the blog series I have already started in the next time and maybe show you some other cool new things I am working on :>

For the beginning I want to show you a small matte painting I have made for my study. Nothing that is outstanding good, but I lacked a bit of time to create more details in it. And it is my first matte painting and for that I think it is quite okay. 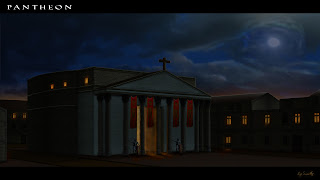 But for everyone who is interested in how to create something like this, I can put this book to the very heart.

It is really well explained and gives a lot of helpful tips to create some amazing stuff. And the things that are explained in this book are not only helpful for matte paintings. I already used some of the techniques from the book to detail a skybox texture for a Source Engine Map I am working on.

So far greets from my side and bye for now :>